Come and discover Saint-Aignan, in the Loir-et-Cher (41).

On the banks of the Cher, the medieval city of Saint-Aignan, classified as a remarkable heritage site, seduces both lovers of heritage and lovers of local products and unusual walks. A medieval town in the heart of the Loire castles (50 km south of Tours) and 2 km from the Beauval zoopark.

In Saint-Aignan, you will be impressed by the Renaissance castle, which dominates the city. Adorned with the famous shell of St. James and the Salamander of Francis I, it was built on the site of an ancient fortress of the ninth century, of which only the Hagard tower remains today. Its construction then continued in the XIXth century with the addition of an octagonal tower. If the castle, now private property, can not be visited, you can nevertheless access its courtyard and its terrace by taking a staircase from the collegiate church.

Erected in the 11th and 12th centuries on the site of a chapel dedicated to Saint John, the collegiate church is a marvel of architecture classified as historical monuments. The apse, the sanctuary, the transept and the central bell tower are Romanesque, and its nave, 16m high, is supported by eight columns with sculpted capitals. The walls of the crypt reveal paintings dating from the tenth century. In the streets of Saint-Aignan, delightful buildings awaken admiration, including a Gothic house of the 14th century, La Prévôté, in which art exhibitions and Hôtel-Dieu are held from May to September, attributed to the architect Jules Hardouin-Mansart. More recently, the Villa Rose, built at the beginning of the 20th century, is covered with a recently restored graffiti fresco.

Visiting Saint-Aignan, it is also to embark on the discovery of its numerous shops of quality. The "House of Wines and Flavors" located in one of the prettiest timber-framed houses of Saint-Aignan with its professionals of local products. Restaurants, shops, delicatessens and boutiques of decoration will not escape your visit. After discovering the city center, a walk takes you along the island-beach, on the edge of the expensive to contemplate the city and its architectural wonders. In the summer, the same Ile-Plage, like a seaside resort, finds its attractiveness: guinguette, entertainment, restaurants and swimming pool. 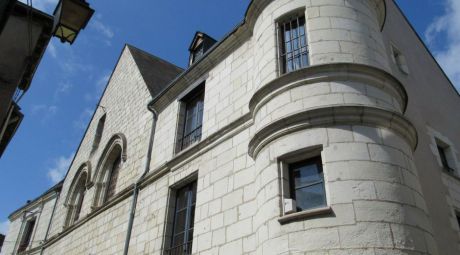